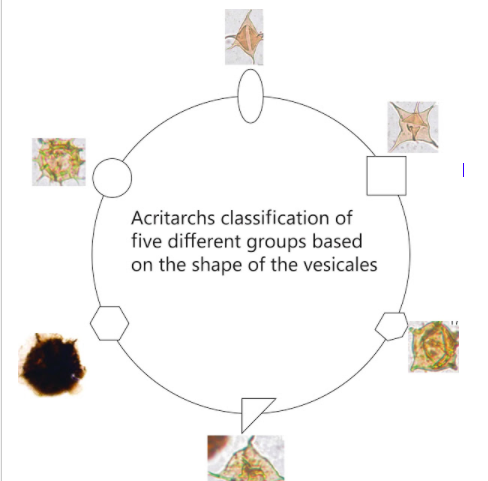 The name of the acritarchs is first derived from the paleontologist Evitt in 1966 which means “uncertain of origin”. The group is named artificially not found in nature as the same fossils in the rocks record under this group. Because acritarchs are still unknown organisms. Much research has been done so far but the exact origin of acritarchs has not been identified. Based on the evidence, some, scientists claimed them to be similar to the algae, probably the cysts of planktonic eukaryotic algae, the carbon isotope study of the acritarch say the delta 13 carbon value is similar with the planktonic marine algae. (Kliti Grice et al 2005).

The size range between 20-80 micron of acritarchs. The acritarchs are mainly unicellular and can be identified using a light microscope. They are characterized by the varied sculpture and spiny and smooth on the surface. some times spike of the acritarchs ca not be found due to heavy treatment of the laboratory experiments. so, during the laboratory experiment, one must be careful to use very carefully to get the unaltered fossils.  the acritarchs are mainly the organic-walled microfossils of the uncertainty of origins.

Size and age ranges of acritarchs:

The oldest known of the acritarchs are form the shale formation of the Soviet Union of  Paleoproterozoic in age. (1900-1600 Ma). They are stratigraphically abundant from Upper Proterozoic to the Permian.  From the Devonian to onward the abundance was declined.  The morphological size of the acritarchs are microscopic and are ranges from 20- 80 micrometer.

Classification of acritarchs is so far had not been done based on the natural appearance. But the Downie and Evitt introduced an artificial scheme of classification that is so far widely accepted among the paleontologist.

Acritarchs are extremely valuable for the stratigraphic correlation of rocks of the Proterozoic and Paleozoic age. they are useful for the paleoenvironmental interpretation where there is less fossil evidence than acritarchs.