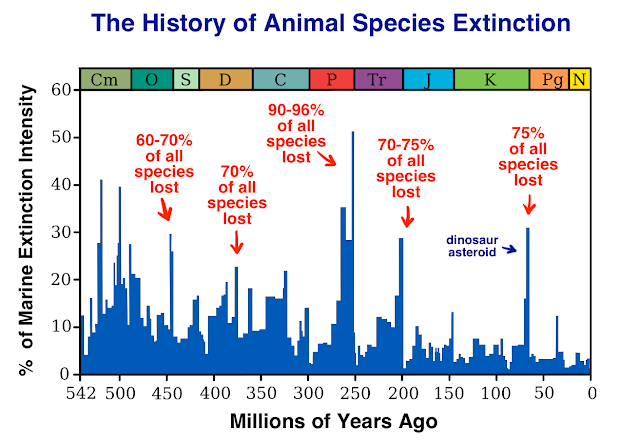 A Mass extinction (গন বিলুপ্তি) is a widespread and sudden decrease in the biodiversity on the planet due to some geological phenomenon.

The extinction event may happen gradually with some phases of slow extinction process. There is 5 mass extinction for far happened in earth history. They are

It is known as the Great Dying events in earth history. It happened in 251.94 Ma ago. More than 90% of all marine species and 70% of the land creature had been eliminated through the world.

Anoxia is one of the oxygen deficiency conditions of the ocean. Due to the excess amount of oxygen consumption by the bacteria or some other organism makes the ocean water anoxic. A sulfur-induced redox reaction is another cause of the anoxic ocean. This anoxic ocean water was the threat for the ocean creature and the small and large animals were died out during the Permian Triassic mass extinction.

Scientists believe that the Permian Triassic mass extinction was due to global warming. The relation between global warming and volcanic eruption has a link. If the volcano erupts then the huge amount of the CO2 makes the globe warm.

The Siberian volcano had a huge eruption and it has a 4 km thick lava, called Siberian Traps, Renne, measured the age of the trap-rocks and a rock of the Permian time from China. He found a 100000 years gap between these two. Scientists discovered the cause of the extinction of in relation to the Siberian Traps.

Actually, a volcano was not the cause but the impact was the cause of the extinction. When a volcano erupts the huge amount of CO2, SO2 and soot emit in the atmosphere.  The SO2 and soot caused the acid rain, the sunlight block and decrease the temperature. The cooling temperature initiates the formation of the glaciation and result of the shallow sea and lowering the diversity of the marine creatures. The shallow sea also releases the ocean methane which causes the greenhouse effect and increases the global temperature.

Geologist and Paleontologist Believe that the Permian Triassic Mass extinction was not a cause of a single event rather multiple events together or simultaneously happened.

The Main Causes of  the Late Devonian extinction:

There are many causes that have been proposed so far for the Late Devonian  Mass Extinction, like, Asteroid impact, Plate tectonics, Sea level changes, Climate change, Global anoxia (Oxygen poor bottom water), etc.

One of the most accepted hypotheses for extinction is a flourish of terrestrial vegetation. This hypothesis is proposed by Thomas Algeo. According to this idea, the highly emerging terrestrial vegetation developed and cause the high input of the nutrient in the seawater. The excess amount of nutrient (Ca, Mg) removes the CO2 from the atmosphere. The loss of this greenhouse gas cools the atmosphere with sea-level drop and causes the mass extinction. Another group of scientists claimed that this terrestrial plant cause soil erosion and high input of nutrition cause the high primary production which causes anoxic bottom water and died out organisms and small creatures.

So, about the Late Devonian extinction still, scientists need to explore the scenario of the cause of the mass extinction.