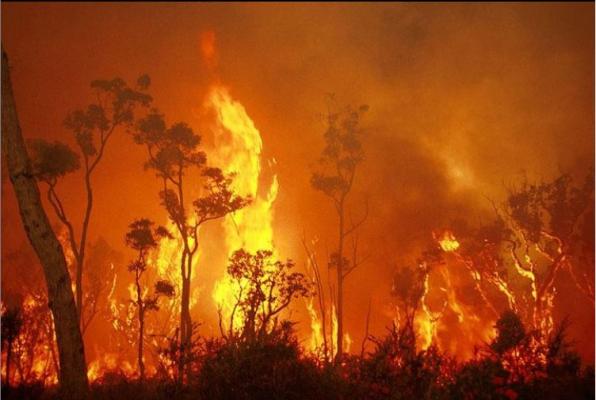 Bushfires are a natural part of the Australian landscape. Many of plants need bushfires to regenerate, and many have adapted to the harsh condition’s climate delivers. With such a vast country, just as the landscape changes from place to place, so too does the bushfire risk and the timing of the bushfire seasons. The bushfires experienced in the 2019-20 season have so far burned more than 10 million hectares of land in southern Australia, greater than the combined area burned in the Black Saturday 2009 and Ash Wednesday 1983 bushfires (D.J. Walsh, 2007).

Causes of Bushfire in Australia:

Australian climate is the main cause for the fire. But there are many significant human causes that’s are directly connected with bushfire.

1. Climate: Australia’s climate is governed mostly by its size and by the hot, sinking air of the subtropical high pressure belt (subtropical ridge). This moves north-west and north-east with the seasons. The climate is variable, with frequent droughts lasting several seasons, thought to be caused in part by the El Niño-Southern Oscillation. Australia has a wide variety of climates due to its large geographical size. The largest part of Australia is desert or semi-arid. Only the south-east and south-west corners have a temperate climate and moderately fertile soil. The northern part of the country has a tropical climate, varying between grasslands and desert. Australia holds many heat-related records: the continent has the hottest extended region year-round, the areas with the hottest summer climate, and the highest sunshine duration. Figure: Climate type of Australia Because Australia is a medium-sized continent, separated from polar regions by the Southern Ocean, it is not subject to movements of frigid polar air during winter, of the type that sweep over the continents in the northern hemisphere during their winter. Consequently, Australia’s winter is relatively mild, with less contrast between summer and winter temperatures than in the northern continents. Seasonal highs and lows can still be considerable. Temperatures have ranged from above 53 °C (127 °F) to −23.0 °C (−9.4 °F). Minimum temperatures are moderated (Government, 2018).

2. Forest Camping: Every year huge percentage of tourist makes their journey in forest area. Mostly they arrange barb-Q party and makes fire in forest also make tent to made night in forest. Figure: Tourist tent in forest 3. Farmland: Agricultural businesses operated across just over half (51%) of Australia’s total land area during 2016-17. At 30 June 2017 there were 394 million hectares of agricultural land in Australia, a 6% increase on the previous year. Every year agricultural business increasing at 2.8% (Joanne Millar, n.d.).

Physical, direct impacts: Over 18 million hectares have burned in the Australian bushfire season 2019–2020 as of mid-January according to media reports, destroying over 5,900 buildings including over 2,800 homes. In addition to human fatalities, many millions of animals are reported to have been killed. Figure: A burned tree like a burned Human Ongoing ecological and biodiversity impacts After initial devastation of the fires, impacts are ongoing. An estimated billion animals, and many more bats and insects, are likely to die in total over the coming weeks and months as a result of lost habitat and food sources. This loss is part of a much bigger picture of a world where biodiversity is in steep decline. We are losing wildlife at an ever-increasing scale across the planet, with impacts to ecosystems vital for our own global food production. The world’s terrestrial biodiversity is concentrated in forests: they are home to more than 80 per cent of all terrestrial species of animals, plants and Figure: A Parrot lying dead insects. So, when forests burn, the biodiversity on which humans depend for their long-term survival also disappears in the inferno. With over 1 million species currently facing extinction if we continue with business as usual, extreme weather events such “megafires” become an increasing matter of concern for species survival. Public Health: As a result of intense smoke and air pollution stemming from the fires, in January 2020 reports indicated that Canberra measured the worst air quality index of any major city in the world. Wildfires produce harmful smoke which can cause fatalities. Wildfires produce fine particle air pollution, which is directly threatening human health even during relatively short exposures. Close to the fires, smoke is a health risk because it contains a mixture of hazardous gases and particles that can irritate the eyes and the respiratory system. The effects of smoke exposure and inhalation range from eye and respiratory tract irritation to more serious disorders, including reduced lung function, bronchitis, exacerbated asthma and premature death. Exposure to particulate matter is the main public health threat from short-term exposure to wildfire smoke. According to the World Health Organization, older people, people with cardiorespiratory diseases or chronic illnesses, children, and people who work outdoors are particularly vulnerable. The impacts of the fires cross borders Smoke from wildfires can travel great distances. It is often pushed into the stratosphere by the heat from fires. Smoke from bushfires in Australia has drifted across the Pacific and may have reached the Antarctic, according to the World Meteorological Organization. This has led to hazardous air quality in major cities throughout Australia and affected New Zealand and cities in South America after smoke reached both Argentina and Chile. Mental health costs Fires do not only cause physical harm; many people experience mental trauma from the experience of emergency evacuation and losing homes, pets, belongings, livestock or other sources of livelihoods. Some communities found themselves unable to evacuate quickly when lost electricity meant fuel stations weren’t operational or blocked roads kept people trapped in high-risk areas. Some were forced to seek safety on beaches and on boats, sheltering children overnight while witnessing unprecedented firestorms. Such experiences can have lasting mental health impacts across affected communities. Economic costs The price tag to the Australian economy is still being analyzed, but it’s clear that infrastructure has been damaged and that impacts extend to industries such as farming and tourism. Some businesses and institutions have been forced to close their doors during periods of excessive levels of air pollution. Climate feedback loops: The bushfires have not only been made more likely and intense by climate change, they also add to it. Until the 2019–2020 Australian bushfire season, the forests in Australia were thought to reabsorb all the carbon released in bushfires across the country. This would mean the forests achieved net zero emissions. However, global warming is making bushfires burn more intensely and frequently and the 2019–2020 bushfires have already emitted 400 megatons of carbon dioxide into the atmosphere, according to the Copernicus monitoring programmed. This is as much as Australia’s average annual carbon dioxide emissions in just the past three months. These will increase Australia’s annual greenhouse gas emissions, contributing to global warming, and heighten the likelihood of recurring megafires that will release yet more emissions. This is a deeply concerning climate feedback loop. Environmental costs, pollution: Ash from the fires has landed in school playgrounds, backyards, and is being washed up on Australia’s beaches and into freshwater stores and water catchments. Drinking water catchments are typically forested areas, and so are vulnerable to bushfire pollution. Bushfire ash contains nutrients, such as nitrogen and phosphorous. Increased nutrient concentrations can stimulate the growth of cyanobacteria, commonly known as blue-green algae. Cyanobacteria produce chemicals which may cause a range of water quality problems, including poor taste and odor, and sometimes toxic chemicals. During a blaze, plumes of smoke, ash and other debris catch on the wind and scatter across the landscape. Sometimes they blow over the ocean, where they add nutrients. When burned soils flow into streams and rivers, they fertilize water plants and algae. The extra nutrients can have benefits in moderation but too much can over-fertilize and cause excess algal growth. Algae absorb oxygen in the water in order to grow, and deplete dissolved oxygen when they die and decompose, which can asphyxiate fish and other marine life, with localized impacts to biodiversity. The same can be true in ocean environments, where smoke has shown to have a negative impact on marine ecosystems in several past incidents: haze from record wildfires in Indonesia killed coral reefs in the late 1990s, according to a study in Science, as iron-rich smoke billowed out over the coast and fertilized the water, causing a huge plankton bloom. The resulting so-called red tide asphyxiated coral reefs around the Mentawai Islands, off southwest Sumatra.

The bushfire have scorched pasture, destroyed livestock and razed vineyards, with regrowth and recovery likely to stretch water resources already challenged by drought. Reports indicate that the country’s dairy supply will likely be hit hardest, with Victoria and New South Wales—Australia’s key milk-producing states—suffering the greatest loss of farmland and infrastructure damage. Meat, wool, and honey output may also be impacted. About 13 per cent of the national sheep flock is in regions that have been significantly impacted and a further 17 per cent in regions partially impacted, according to Meat & Livestock Australia. The Intergovernmental Panel on Climate Change (IPCC) in their 2019 report on Climate Change and Land found that climate change has already affected food security and the agriculture industry due to warming, changing precipitation patterns, and greater frequency of some extreme events (high confidence). In some dryland areas, increased land surface air temperature and evapotranspiration and decreased precipitation amount, in interaction with climate variability and human activities, have contributed to desertification. These areas include Australia. Public attitudes are changing While Australians are reported to have been subject to misinformation campaigns and targeted attempts to undermine the link between climate change and more intense bushfires, this bushfire season has given Australians, and the watching world, an insight into the humanitarian, ecological and economic catastrophes of a changing and warming climate. The United Nations Environment Program (UNEP) and other members of the United Nations family will continue to use its digital platforms to share accurate information and facts about the science of climate change and how it is increasing the likelihood and intensity of extreme—and tragic—weather events like this. Bush Fire Survival Plan: There are four simple steps to get ready for a bush fire (Government, 2020). Step 01: Discuss what to do if a bush fire threatens of nearest forest of home. Step 02: Prepare home plan and get it ready for bush fire season. Step 03: Know the bush fire alert levels. Step 04: Keep all the bush fire information numbers, websites and the smartphone app. Conclusion: Bush fire is not newly occurrence event in Australia. But it is true that nature wants to remain her continuity by facing a problem and reconstruct herself. But as a modern day and increasing population, demand, technology nobody want any harm to nature. Constantly climate is changing and impacts are increasing day by day. So, along with climate change bush fire does not expected. References Bishop, J., 2020. Burnt Assets, The 2019-2020 Australian Bushfire. In: Bushfire Response 2020. s.l.:s.n. D.J. Walsh, K. R. J. H., 2007. Reporting fire in Australia’s forests and vegetation. Austalian Government Bureau of Rural Science, pp. 4-6. Government, A., 2018. Australian’s Changing Climate. In: Australian Climate Change Science Programme. s.l.:s.n. Government, N., 2020. NSW RURAL FIRE SERVICE , s.l.: s.n. Joanne Millar, J. R., n.d. Changes in Australian agriculture and land use: Implicaions for future food security. International Journal of Agricultural Sustainability, pp. 25-39.