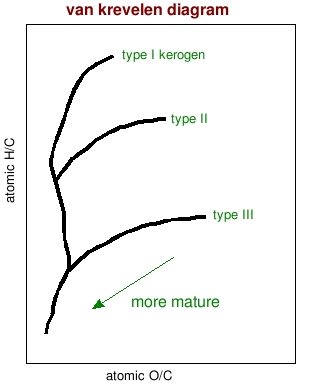 Kerogen is defined as the fraction of large chemical aggregates in sedimentary organic matter that is insoluble in solvents (in contrast, the fraction that is soluble in organic solvents is called bitumen). Kerogen represents about 90% of the organic carbon in sediments. It is possible to obtain information about the overall structures and biomarker contents of the macromolecular organic matter.

Kerogen can be classified by source material:

You can also glean information about the source and type by the amount in a sample:

One of the most commonly used techniques is called Rock Eval Pyrolysis, which helps us identify the type and maturity of kerogen. The Rock Eval pyrolysis method consists of a programmed temperature heating (in a pyrolysis oven) in an inert atmosphere (helium) of a small sample to quantitatively and selectively determine (1) the free hydrocarbons contained in the sample and (2) the hydrocarbon- and oxygen-containing compounds (CO2) that are volatilized during the cracking of the unextractable organic matter in the sample (kerogen).

In summary, the data produced from a Rock Eval Pyrolysis is

The type and maturity of organic matter in petroleum source rocks can be characterized from Rock Eval pyrolysis data using the following parameters:

From this information, we can place our samples on a van Krevelen diagram, shown below, which is a plot of the bulk element ratios, H/C vs. O/C. The three different kerogen types, in the tables above, mature along three different evolutionary paths on van Krevelen diagrams. As a given sedimentary rock becomes more mature during burial, the kerogen becomes more depleted in hydrogen and oxygen relative to carbon.

Other information we can get from kerogen are the TOC%, or total organic carbon content, and its bulk isotopic composition. Techniques to analyze are complex, targeting the structures of component biomolecules using different types of pyrolysis, chemical degradation and spectroscopic methods. 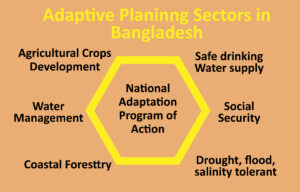