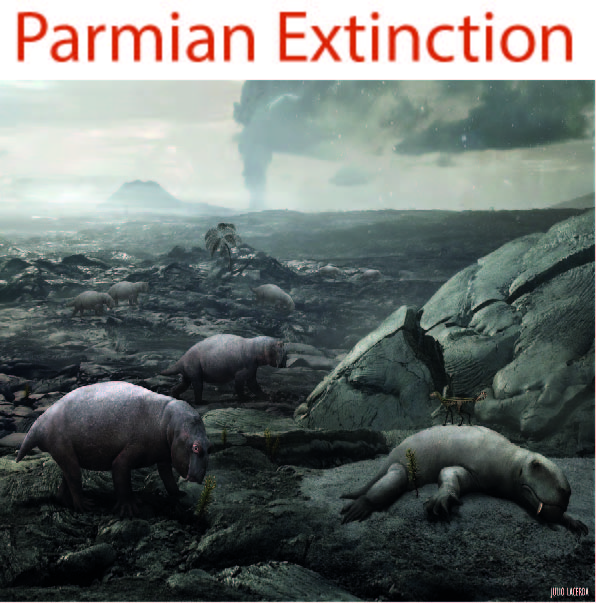 Late Permian Mass extinction (252 Ma) was the most devastated. It almost wiped out all the land species (95%) including widespread flora of Gondwana Land and affecting non-marine, marine vertebrates and invertebrates. These great events were evidenced by extensive soil erosion events on land, wildfire, and replacement of lower plants than trees and complete loss of the peat-forming vegetation. The two most important phase of these events was evidence of the great event;

Sudden flourish of unknown origin of acritarchs in marine environments. These two events represent the tremendous amount of the stress environments in which these stress-tolerant organisms were survived and they are the marker of the Permian Triassic mass extinction of 252 Ma ago.

Scientists found some evidence that just after the Permian mass extinction the environment was very stressful and they found the evidence of that stressful environments on land and in the sea.

The morphological characteristics of  Reduviasporenite are similar to modern Ryezoctonia. Some scientist says it to be the algal origin which was widely spread out during that time. carbon and Nitrogen isotopes value is similar to that fungal spike reduviasporonite which indicates the fungal species. Fungal spike events both the non-marine and marine sediments with a negative shift of the d13 carbon isotope value indicate the coincidence of the Latest Permian extinction events.

The acritarchs are organic-walled micro-fossils of the unknown origin. The size of acritarchs can vary between 20-80 micron. They are very oldest fossil in the paleo-history. In the Latest Permian age, they are found across the Permian Triassic Boundary.

So, They are P/T Boundary marker. Acritarchs special characterize are they are organic-walled with an ornament or the spike with five different in shape. They are classified into five different types based on the shapes of the cuticles.like, rectangle, pentagonal, hexagonal, Triangle, Square round and Oval-shaped acritarchs.

These stress-tolerant acritarchs are phytoplankton in origin some scientists claimed.

The study revealed that irrespective of origin they are widely found across the Permian Triassic Boundary followed by the latest Permian mass extinction.

These two (Fugal Spike and Flourish of Acritarchs) events might have been the marker of the deadly Permian extinction events in which more than 90% of all species wiped out. The extensive research with this event still may be enigmatic. Because scientist believes that Siberian volcanic eruption during the main phase of the Permian age may cause extinction.

As a trigger, many of the chain events may come into play to finally cause the Great dying event. After the extinction, the Permian environments were so severely bad that it took a long time to recover from this great disaster until Mid-Triassic.