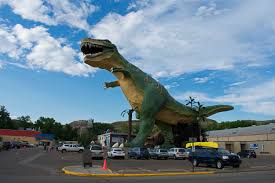 Bangladesh is one of the younger country than countries in Indian subcontinents. The oldest sediments of Bangladesh is Pleistocene 18 hundred thousand years. Whereas the India has much older sediments there and is more than 25 million years. The age of rocks of the country is major factor to find the answer of this question. Because, age of dinosaur is 6.6 million years. Dinosaur lived in 6.6 millions years ago in India.

Dinosaur wiped out by the asteroid impact 6.6 million years ago from Indian continent.

After that there was no dinosaur 🦖 in this world. Bangaladesh is formed by the river transported sediments piling up. All the alluvial sediments transported by the gangages river system to the bay of Bengal and formed the deltaic country named Bangladesh. This forming process is relatively young. Because from Himalayan mountains the Ganges River system initiated. To know the details history of the delta formation we have to know the formation of Himalaya. The present Himalayan mountains was not there before 6.6 millions.

From the above tectonic history we clearly know that Bangladesh has no history of occupying the land suitable for the dinosaur 🦖.

Hence Bangladesh has no dinosaur fossils ever. Because before the formation of Bangladesh all the dinosaur already extinct from this world.