Most of the areas of Bangladesh lies within the broad delta formed by the Ganges and Brahmaput rivers. Lands are exceedingly flat, low-lying, and subject to annual flooding. Much fertile, alluvial soil is deposited by the floodwaters. The only significant area of hilly terrain, constituting less than one-tenth of the nation’s territory, is the Chittagong Hill Tracts in the narrow southeastern part of the country. Small, scattered hills lie along or near the eastern and northern borders with India.

Bangladesh is a land of rivers that crisscrossed throughout the mostly flat territories of the country. They include hundreds of brooks and a good number of big ones. The Ganges (Ganga) is known as the Padma below the point where it is joined by the Jamuna River, the name given to the lowermost portion of the main channel of the Brahmaputra. The combined stream is then called the Meghna below its confluence with a much smaller tributary of the same name. In the dry season the numerous deltaic distributaries that lace the terrain may be several kilometers wide as they near the Bay of Bengal. Throughout the country there are bils, haors and lakes that meet the need of drinking, bathing and irrigating water.

Bangladesh has a tropical monsoon-type climate, with a hot and rainy summer and a dry winter. January is the coolest month with temperatures averaging near 26 deg C (78 d F) and April the warmest  with temperatures from 33 to 36 deg C (91 to 96 deg F). The climate is one of the wettest in the world. Most places receive more than 1,525 mm of rain a year, and areas near the hills receive 5,080 mm). Most rains occur during the monsoon (June-September) and little in winter (November-February).

Bangladesh is subject to devastating cyclones, originating over the Bay of Bengal, in the periods of April to May and September to November. Often accompanied by surging waves, these storms can cause great damage and loss of life. The cyclone of November 1970, in which about 500,000 lives were lost in Bangladesh, was one of the worst natural disasters of the country in the 20th century.

Chittagong Hill Tracts, portions of the Madhupur Tract, and the Sundarbans (a great tidal mangrove forest in the southwestern corner of the country) are principal vegetation in Bangladesh. The wooded area amount to less than one-sixth of the total area. Broadleaf evergreen species characterize the hilly regions, and deciduous trees, such as acacia and banyan, are common in these areas. Commercially valuable trees in Bangladesh include sundari (hence the name Sundarbans), gewa, sal (mainly growing in the Madhupur Tract), and garan (in the Chittagong Hill Tracts). The country also has many varieties of bamboo.

Bangladesh is rich in fauna, including nearly 250 indigenous species of mammals, 750 types of birds, 150 kinds of reptiles and amphibians, and 200 varieties of marine and freshwater fish. The rhesus monkey is common, and gibbons and lemurs are also found.

The Sundarbans area is one of the principal remaining domains of the Royal Bengal tiger, and herds of elephants and many leopards inhabit the Chittagong Hill Tracts. Other animals living in Bangladesh include jackal, Bengal fox, wild boar, kingfisher, and swamp crocodile etc.

Bangladesh is not so rich in mineral resources. The principal energy resource, natural gas, is found in several small fields in the northeastern part. With the assistance of some foreign especially American companies gas expedition has increased. There is a coalfield in the northwest and large peat beds underlie most of the delta.

Bangladesh is situated in the Bengal Basin. It is bordered on the north by the steep Tertiary Himalayas, on the norhteast and east by the late Tertiary Shillong Plateau, the Tripura hills of lesser elevation and the Naga-Lusai folded belt, and in the west by the moderately high ancient Choto Nagpur plateau. The southern fringe of the basin is not distinct, but the geophysical evidence indicates that it is open towards the Bay of Bengal for a considerable distance. The geographical setting makes Bangladesh particularly vulnerable to cyclones, storm surges and tornadoes.

The Bay of Bengal is the breeding place of catastrophic cyclones. It is situated in the northeastern corner of the Indian Ocean, It  occupies an area of about 2.2 million sq. km, and is 1,609 km wide, with average depth of more than 7912 meter, and the minimum depth is 4,500 meter (Encyclopedia Britannica, 1980). The Bay of Bengal cyclones mostly originate near the Andamans. Astronomical influences on the tides can lead amplification of surge heights, resulting in severe flooding.

The geographical location of Bangladesh also makes it subject to various climatic features that make it more susceptible to abnormal storms and tornadoes. Intense ground heating during pre-monsoon months can influence the normal seasonal winds that bring rain, the Nor’westers, high speed winds of a tornado. The location of various major and minor faults near Bangladesh also makes it vulnerable to the effects of earthquakes and tremors.

Bangladesh is a land of many rivers, and heavy monsoon rains. Bangladesh is the largest delta in the world, formed by the Ganges, the Brahmaputra, and the Meghna (GBM) river system. It is characterized by 700 rivers, canals, and streams, with a total length of approximately 22,155 km (BBS 1979, 1998), which carry an enormous quantity of sediment-laden water downstream.

It is estimated that every year an average of 870 million acre feet (MAF) of water flows into the country from India. The amount of rainfall received within the country is estimated at 203 MAF.

During the peak flow season (July – September) most of the rivers normally overflow their banks onto the low-lying surrounding flat land, which is essential for providing vital moisture and fertility to the soil. However, occasionally abnormal conditions lead to drainage congestion, and storm-tidal surges that induce high-magnitude flooding that inundates large areas, and causes widespread damage to crops and property. The devastating floods of the recent past are due to excessive rainfall in the GBM catchment area.

The mean annual rainfall in Bangladesh varies from about 1400 mm. in the western part of the country, to almost 5000 mm. in the northeast region. There are wide seasonal fluctuations, with about 90 per cent of the rainfall occurring during the four months of the monsoon period (June- September). A number of constraints are inherent pattern, which can lead to excessive amounts of rainfall and floods, or inadequate rain resulting in drought.

Along with the floodwater, the rivers of Bangladesh carry huge amounts of sediments, an estimated 2.4 billion m.tons/year.

The causes of natural disasters in Bangladesh have an international dimension. The 57 main rivers flowing through Bangladesh are trans-boundary; 54 of them have origins in India, and 3 in Myanmar. Deforestation, heavy rainfall, melting of glaciers, and soil erosion play a vital role in causing situation in riverbeds. This in turn leads to natural disasters like floods, flash floods, etc. The upstream activities also enhance the magnitude of damages caused by these disasters. The upstream withdrawal of water due to the Farakka barrage across the Ganges in India leads to local drought conditions in regions of Bangladesh. There is firm scientific evidence that largely due to human activities the concentration of greenhouse gases in the earth’s atmosphere is increasing. The consequences will be progressive global warming and climate change. Bangladesh is thought to be one of the most vulnerable countries in the world to climate change, and the resultant Sea Level Rise (SLR) that is apprehended.

It is expected that Bangladesh may get warmer and wetter owing to global warming. Higher precipitation may increase the area and depth of flooding, which will require additional measures for protection and adaptation. Other probable pressures include disruption of the monsoon rhythm, prolonged drought, and increased frequency of cyclones. The most serious consequence of climate change for Bangladesh will be a rise in sea level along the Bay of Bengal coast, causing submergence of 10 to 20 per cent of the land (including the Sundarbans), as well as saline intrusion in the rivers.

The SLR might make an impact on the country as a whole by inundating one-tenth of the total land area along the coastal belt. If this happens, about ten million people living in the coastal areas of Bangladesh will be forced to migrate further inland. This will put tremendous population pressure on the mainland. 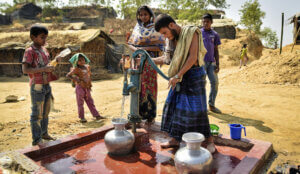