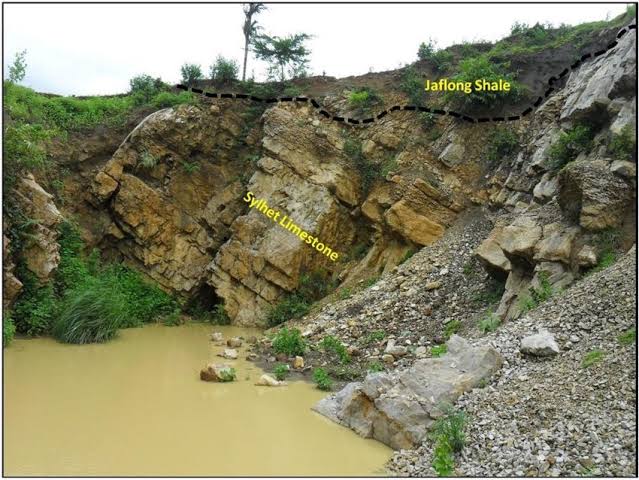 Limestone is a carbonate sedimentary rock that consists of the shell fragments of marine organisms such as coral, foraminifera, and mollusks.

There are many different names used for limestone on the basis of how the rock formed, it appearance or its composition and other factors.

Chalk: A fine-grained, light colored limestone formed from the calcium carbonate skeletal remains of tiny marine organisms such as foraminifera or marine algae.

Fossiliferous: A limestone remains obvious and abundant fossils. These are generally shell and skeletal fossils of the organisms which is produced the limestone.

Lithographic: when a dense limestone with a very fine and very uniform grain size that occurs in thin beds which separate easily to form a very smooth surface, it is called lithographic limestone.

Lime: while calcium carbonate is heated to high temperature in a kiln the products will be a release of carbon dioxide gas and calcium oxide or lime. It is widely consumed in acid neutralization agent in the chemical industry.

Marine: Mostly form in shallow, calm, warm marine water. When animals die, their shell and skeletal debris accumulate as a sediment that might be lithified into limestone. Some limestones can form by direct precipitation of calcium carbonate from marine or fresh water. Limestone formed this way are chemical sedimentary rock.

Evaporative: Limestone can also form through evaporation. In a cave, droplets of water seeping down from above enter the cave through fractures or pore spaces in the cave ceiling. There they might evaporate before falling to the cave floor. When the water evaporates, it releases the calcite which, over time builds up to form new limestone.

Two types of limestone form in the cave. They are-

Tufa: a fine grained limestone that was deposited quickly. It is formed by precipitation of calcium-laden waters at a hot spring, lake shore or other location.

Age: St. Martin’s Island is Late Pleistocene and the other limestone is of Eocene age.

Cement factories: There are approximately 32 cement producing companies in Bangladesh. They mainly utilize Ordinary Portland Cement (OPC) and Portland Composite Cement (PCC), which is composed 95% of clinker and latter 65%-80%. Again, PCC has attained popularity in the country because of its expense effectiveness, lower environmental impact, and versatility in various applications.

Coquina horizon is composed chiefly of mechanically sorted fossil debris such as mollusca, ostracoda, foraminifera, corals. Coquina bed is also called shelly limestone. The bed is approximately 6.5m cliff of 166m length along the eastern coast of Dakshinpara. From the coquina cliff data, some scientists have suggested that the present mean uplifting rate of the island can be estimated as 19 mm/year.

Chief raw material for cement; building material; aggregate for the base of road, railway lines, river banks; preparation of paper, steel, sugar, glass, lime and Tripple Super Phosphate, D. D. T factory, Tanneries; white pigment or filler in products such as toothpaste or paint and chemical feedstock for the production of lime; Clinker is an inevitable component of cement which strengthens the quality of cement.

In Joypurhat area, GSB estimated that in 1978, the total reserve of limestone is about 270 million tons of which 100 million ton is mineable from an area of 6.7 sq km. Cementation Mining Ltd of UK estimated the underground temperature of the mine area little higher and the freezing cost of the mineshaft will be higher and as a result the mine will not be economically feasible. So the extraction was totally postponed. GSB in the years 1996 and 1997 drilled two more holes to get the limestone at shallower depth but these were not successful. However, GSB discovered the biggest ever limestone deposits in Naogaon in 2016. The state minister said that it might take two years for the mine to go into production and also saves 1000 crore a year.

1 thought on “Limestone deposits in Bangladesh”