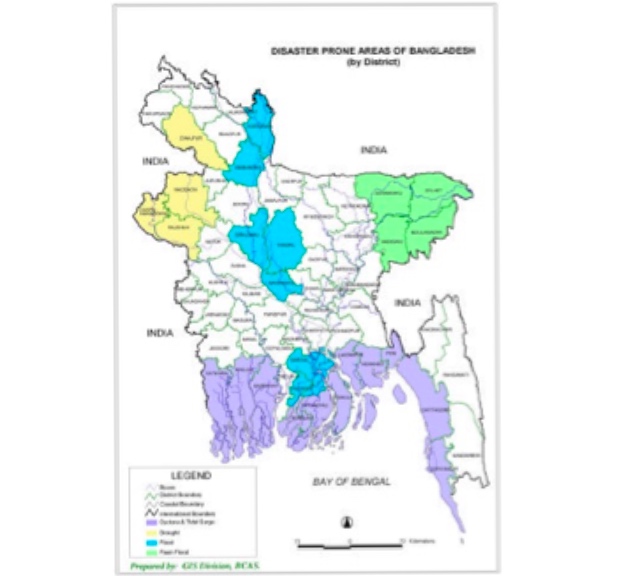 Bangladesh is most vulnerable to several natural disasters and every year natural calamities upset people’s lives in some part of the country. The major disasters concerned here are the occurrences of flood, cyclone and storm surge, flash flood, drought, tornado, riverbank erosion, and landslide. These extreme natural events are termed disasters when they adversely affect the whole environment, including human beings, their shelters, or the resources essential for their livelihoods. The geographical setting of Bangladesh makes the country vulnerable to natural disasters. The mountains and hills bordering almost three-fourths of the country, along with the funnel shaped Bay of Bengal in the south, have made the country a meeting place of life-giving monsoon rains, but also makes it subjected to the catastrophic ravages of natural disasters. Its physiographic and river morphology also contribute to recurring disasters. Abnormal rainfall and earthquakes in the adjacent Himalayan range add to the disaster situation. Effects of El-Nino-Southern Oscillation (ENSO) and the apprehended climatic change have a great impact on the overall future disaster scenarios. Since Bangladesh is a disaster-prone country, it is subject to colossal damages to life and property almost every year. The different types of disasters and their impact on the affected areas can broadly be summarized as in the accompanying table below.

Flood is a recurring phenomenon in the country, locally termed as Bonna or Borsha based on the intensity of monsoon rain, magnitude and time of occurrence. When the flood water damage resources, and disrupt communication and livelihood systems, then it is treated as Bonna. Bangladesh gets damaging floods like that of 1988, which bring untold sufferings to millions of people, and result in human deaths, loss of livestock, spread of diseases and hunger, damaged standing crops, destroyed physical and economic infrastructures, damaged fish and shrimp ponds and hatcheries, etc. Cyclone and storm surges occur frequently and cause significant destruction in the coastal areas of the country. Tornadoes also frequently hit different places. Tropical cyclones and tornadoes uproot trees, telephone, telegraph and electricity lines, destroy bridges, culverts, and houses, kill people and domestic animals, leaving serious and adverse effects on the economy as well as on the whole environment. Although this country with monsoon climate has enough rain, droughts frequently take a significant portion out of the agricultural economy of Bangladesh, and cause hunger, instability, and insecurity. The northwestern part of the country is vulnerable to drought. Disastrous erosions are mainly associated with the major river systems of the country and are seen along these river banks i.e., the Brahmaputra- Jamuna, the Ganges-Padma, the Lower Meghna, and other rivers.

The effects of a natural disaster or a combination of more than one natural disaster may be direct loss of life, and certainly damage to physical properties. This requires large resources for disaster management including mitigation, recovery and preparedness. Therefore, the consequences of these natural hazards and the resulting environmental degradation pose a serious threat to the economic development of the country. The situation calls for an effective disaster warning and dissemination system. A timely and accurate alert system about impending disasters will help reduce the loss of life and property (Pramanik, 1991). Natural disasters cannot be prevented, but the damage can be mitigated with adequate planning and adaptation. The impacts of these disasters vary with their type and magnitude. They also critically depend on institutional strength and response by the different agencies that usually take measures to mitigate and eventually overcome the losses, such as the government and other civil service organizations.

It has often been pointed out that the worst disasters in the world tend to occur between the Tropic of Cancer and the Tropic of Capricorn, which is coincidentally the area that contains the poorer countries (Carter, 1991). This applies to Bangladesh where the cause of natural disasters is its geographical setting. The lofty Himalayas in the north, and the funnel-like shape of the Bay of Bengal in the south, have made Bangladesh one of the worst victims of the catastrophic ravages of natural disasters like floods, cyclones, storm surges, droughts, etc. Various anthropogenic activities contribute to worsen the situation. Due to recurring disasters, the country is subject to food shortages in spite of its fertile land, network of rivers, subtropical monsoon climate, and hard working people. A large part of the population is dependent on agricultural production. But harvesting of product is often affected by extreme natural events and the weather patterns frequently associated with them. The pressures on the environment that exacerbate the natural disasters in Bangladesh are summarized in Table below and some are described briefly below.

The Intertropical Convergence Zone (ITCZ) is the area encircling the earth near the equator where winds originating in the northern and southern hemispheres come together. where the trade winds of the Northern and Southern Hemispheres come together. The intense sun and warm water of the equator heats the air in the ITCZ, raising its humidity and causing it to rise. As the air rises it cools, releasing the accumulated moisture in an almost perpetual series of thunderstorms.

Variation in the location of the ITCZ drastically affects rainfall in many equatorial nations, resulting in the wet and dry seasons of the tropics rather than the cold and warm seasons of higher latitudes. Longer term changes in the ITCZ can result in severe droughts or flooding in nearby areas.

The ITCZ was originally identified from the 1920s to the 1940s as the “Intertropical Front” (ITF), but after the recognition in the 1940s and 1950s of the significance of wind field convergence in tropical weather production, the term “ITCZ” was then applied.

Where the ITCZ is drawn into and merges with a monsoonal circulation, it is sometimes referred to as a monsoon trough, a usage more common in Australia and parts of Asia.

The ITCZ appears as a band of clouds, usually thunderstorms, that circle the globe near the equator. In the Northern Hemisphere, the trade winds move in a southwesterly direction, while in the Southern Hemisphere, they move northwesterly. The point at which the trade winds converge forces the air up into the atmosphere, forming the ITCZ. The tendency for thunderstorms in the tropics is to be short in their duration, but can produce intense rainfall. It is estimated that 40 percent of all tropical rainfall rates exceed 25 mm per hour (one inch per hour). Greatest rainfall typically occurs when the midday Sun is overhead. On the equator this occurs twice a year in March and September, and consequently there are two wet and two dry seasons.

The Intertropical Convergence Zone, or ITCZ, is the region that circles the Earth, near the equator,

Further away from the equator, the two rainy seasons merge into one, with one wet season and one dry season. In the Northern Hemisphere, the wet season occurs from May to July, in the Southern Hemisphere from November to February.[2]

The location of the intertropical convergence zone varies over time. Over land, it moves back and forth across the equator following the sun’s zenith point. Over the oceans, where the convergence zone is better defined, the seasonal cycle is more subtle, as the convection is constrained by the distribution of ocean temperatures.

Sometimes, a double ITCZ forms, with one located north and another south of the equator. When this occurs, a narrow ridge of high pressure forms between the two convergence zones, one of which is usually stronger than the other.

Western Disturbance is the term used in India, Pakistan and Nepal to describe an extratropical storm originating in the Mediterranean, that brings sudden winter rain and snow to the northwestern parts of the Indian subcontinent. This is a non-monsoonal precipitation pattern driven by the Westerlies. The moisture in these storms usually originates over the Mediterranean Sea and the Atlantic Ocean. Extratropical storms are a global, rather than a localized, phenomena with moisture usually carried in the upper atmosphere (unlike tropical storms where it is carried in the lower atmosphere). In the case of the subcontinent, moisture is sometimes shed as rain when the storm system encounters the Himalayas.

Western Disturbances are important to the development of the Rabi crop in the northern subcontinent, which includes the locally important staple wheat.